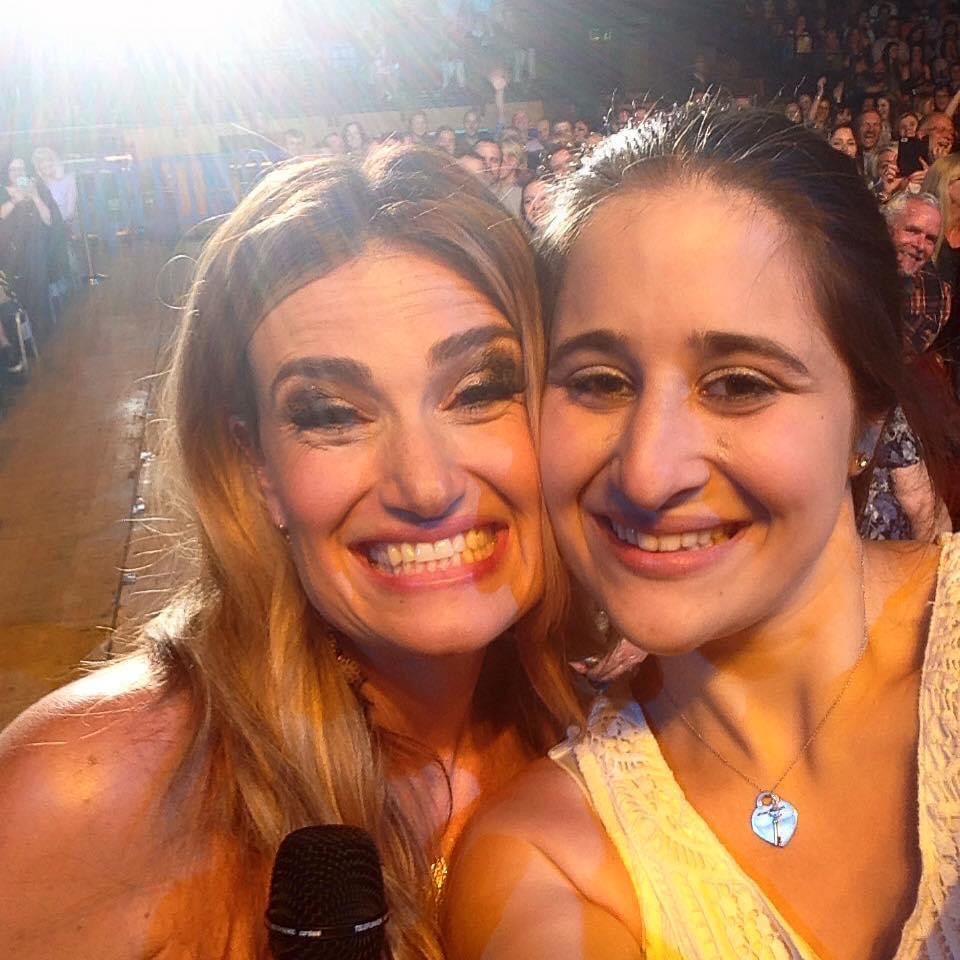 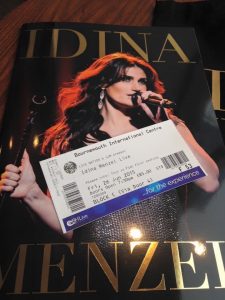 Friday 26th June 2015 – Bournemouth International Centre is a day I will remember forever! I actually attended the concert alone, I didn’t care, I was seeing Idina Menzel and I Think I def got more than my moneys worth!

WOW! I can’t actually believe that I saw my Idol & Role Model! I was so overwhelmed with emotion. As soon as she started to sing Defying Gravity as her opening number I felt like I was in a dream. When she started to sing ‘Take me or leave me’ from the hit musical RENT, I knew from other videos she picks audience members to sing with her as its a duet. I took a risk as I walked up to her and asked if I could sing with her, and Im so grateful she didn’t turn me away. It was a dream come true!

I was in the 6th row and I had to get past 6 people to meet Idina off Stage. She asked me what I was doing and all I said was Please Can I sing with you, Please… she continued to say about ‘others raising there hands, but your going to just go for it?’ She rightly then said…’I don’t know it could be considered as rude or passionate ‘ and I said very passionate! I even said to her you never know until you ask! Then I Did actually start to move back and she grabbed my hand…Oh my god my heart sank, Idina was holding my hand! THE IDINA! She said I had confidence and she respected that! After I sang she gave me a kiss on the cheek and a massive hug – don’t worry I have showered since lol! As she hugged me I thanked her for the opportunity and asked for a photo, which she then said to me ‘turn’! I was shaking at this point trying to take the perfect selfie of a life time and she held my arm an said it was ok! I thanked her again and she said ‘Yea sure, I Appreciate that.

Alot of people ask me why I did it and didn’t I think it was rude….Yes in some way they are right and I could of Completely had a different reaction from the audience. It was strange as I wasn’t nervous at all approaching Idina, However I was shaking after I sat back down and thought….Oh my god what did I just do, Did that just happen…..

After the song, Idina went back onto the stage to sing the most beautiful song ‘No Day but Today’ also from Rent. Before she began she was talking about life and a friend she lost. She praised my actions and said how brave I was to come out to her and that you have to take theses moments and go for it! It was amazing how she supported my actions to make a dream come true.

I did take a MASSIVE Risk, and boy did it pay off! I wanted to also show people that you have to go out there and get what you want, your dreams wont happen just by sitting down. I always remember the advice I was always given, If you walk into a audition room full of people and you sit at the back waiting your more than likely not to get the role, if you go straight to the front and prove yourself then your more likely to get noticed!

I had a pretty rubbish end to 2014 as I lost my mum at Christmas to a 6 month battle to Cancer and I just got to a point where I was fed up of waiting for things to happen and just wanted to see what would happen if I did put myself forward!

I have had some AMAZING comments & Support from some people, but I want those who are not so supportive and annoyed for my actions that I do understand your views, however Idina Could of rightly of said no which I was expecting and with hundreds of people waiting to sing with Idina it was a million to one chance.

After the show some people came up to me and said how amazing that was and brave! Some even asked if I perform on the West End ( I so wish)

Going Home, my husband picked me up with my daughter and they couldn’t believe what had happend, I was very much on cloud 9! When I got home my twitter & Facebook account went crazy, so many great comments and videos being shared, which Im so grateful for to all those people. I didn’t get off twitter till 3am! and the following day I was being contacted by the Daily Echo for an Interview which made it into the papers!

Thanks to the kindness of other audience members for videoing my special moment, that I will treasure for a life time. Dreams can come true!

Ive posted some videos of this amazing night! If you get a chance to go see her…seriously go!!!! 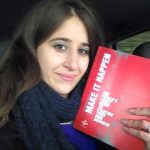